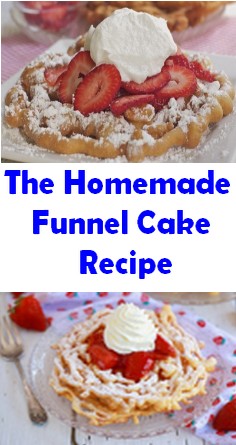 It is always good to innovate and try new things in the kitchen. Sometimes children get bored of the same desserts and snacks. The Funnel Cake, which means funnel cake in Spanish, is simple and delicious. A very popular recipe in the United States, although it is said to be native to the Netherlands and that emigrants from that country served it at the folk festival in Kutztown (Pennsylvania). They are very similar to churros, but with another presentation

In a bowl, mix flour, salt, and sugar. Stir with a fork to integrate the dry ingredients. Incorporate the egg, milk, vanilla extract, and sunflower oil. Keep beating until you get the mixture homogeneous and without lumps. Put the cream in a pastry bag. In a pan, heat a little oil, it is convenient not to add much, as the dough strips should be supported from the bottom. With the pastry bag, get ready to make a kind of grid, dropping the preparation and moving the sleeve. Be careful when pouring the dough because the oil might jump. Cool with the flame of the kitchen not too high and make sure to brown it on both sides for several minutes. When ready, take out and let stand on a plate with absorbent paper. To serve, sprinkle with icing sugar first